The tiny overseas territory of Montserrat, part of the Leeward Islands of the Eastern Caribbean, has been hosting the Queen’s Baton for the past three days. The island is small and the population is a mere 3,500 people (approximately).

In 1995-97 the Soufriere Hills volcano which sits at one end of the island became active, spewing out ash and rock - the town of Plymouth was in danger. The population of the island, 12,000 at the time, were evacuated. The destruction caused by the volcano made two-thirds of the island uninhabitable; homes and towns were buried. Life had changed forever on Montserrat. Nine thousand people decided to seek a safer life elsewhere and left, emigrating for distant shores.

But the remaining islanders and those who have arrived since do not let themselves be defined by the volcano - it doesn’t tower over everyday life. The people look forwards and not backwards. This is clearly seen by how welcoming the population has been to the Queen’s Baton and in their hosting of events.

The baton has visited schools and nurseries to see the school children; it has been escorted by Miss Montserrat, Mr Montserrat and Miss Teen Montserrat through the streets in a convertible car, also stopping at the police station. It has been danced with by the Emerald Shamioles Masquerade dance troupe, been carried along the Oriole trail by James Scriber Daley in search of the elusive Oriole bird, the national bird and only bird species which is endemic to Montserrat. To enjoy a Caribbean sunset the baton memorably visited the Mountain Volcano Observatory on its hill peak location, where it met lead-scientist Rod Stewart from Haddington, Scotland! 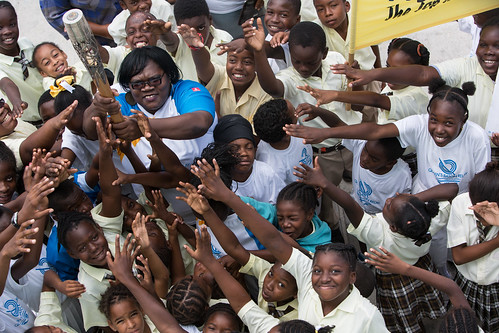 Although there is now a smaller population from which to find athletes to compete at the Games and although Montserrat is yet to win a medal during appearances at five Commonwealth Games’, it isn’t for lack of trying.

This year a four-man athletics team, coached by the aptly named trainer Mr. Wilston Scotland, will compete in Glasgow and we met them as the baton was hosted at the Montserrat Secondary School sports day. At the sports event we saw the drive and determination to compete, excel and win in sports that is perhaps an indication of the strong resilience and character of the people, a defiant trait which has helped the locals in the face of tragedy.

At the sports day the youths raced for their different schoolhouses in blue, green, orange and red team outfits, all competing in individual races as well as striving for overall team points. The crowd, made up of approximately a third of the island’s population, cheered on the teams, whilst in the air the aroma of jerk chicken barbecue floated past, and ultimately the sun set on a terrific day of sporting achievements.

Some records were broken, as they should be, though some records still stand. In the dying rays of the day’s sun, life felt good on Montserrat and the people were smiling, looking forward to the next sporting competition and to cheering on their team at Glasgow 2014 Games.