For the past three days the Queen’s Baton has journeyed through Jamaica, the Caribbean nation being the 54th nation the baton has visited. The country is famed for the continued success of its track and field athletes, and how sport in general plays an important role in the education and lives of Jamaican children.

Schools and colleges throughout the baton’s journey had proudly boasted of previous students that had gone on to sporting success. With 112 Commonwealth Games medals to the nation’s credit, there are more than enough former students to take the baton around the island!

The baton was met at McIntosh Memorial School by the voices of singing children:

The schoolchildren waved their Jamaican flags as the Queen’s Baton arrived in their midst, happy to catch a glimpse as it made its way through the country.

Shelly-Ann Fraser-Pryce, the fastest Jamaican woman sprinter of all time and double Olympic Gold winner also held the baton whilst acting as a Goodwill Ambassador for UNICEF, the charity partner of the Glasgow Games.A trio of sprinters hen held the baton for a unique photo opportunity 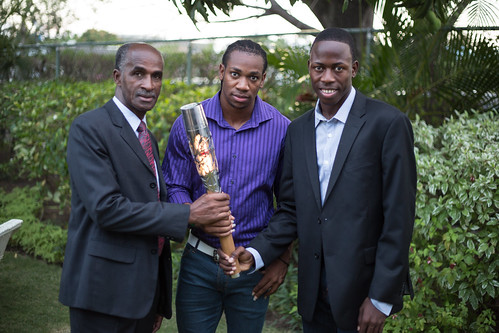 Don Quarrie, a veteran of five Olympic Games who holds six Commonwealth gold medals, was ecstatic to lift the baton aloft before handing over to modern day legend Yohan “The Beast” Blake. The Olympian and record holding sprinting ace, held the baton and declared his intention to compete at Glasgow 2014 this year!

Last of the trio was Javon Francis, one of the potential stars of the future, who recently broke the record in the 100m Sprint Youth Record previously held by national hero and legend Usain Bolt! Jamaica has high hopes for Javon, looking to emulate the ‘Lightning Bolt’ and bring more success to the Caribbean country.

Usain Bolt’s presence is everywhere in Jamaica, but we sadly didn’t catch him on our journey through this fantastic landscape. We do hope to see the fastest man alive in Glasgow for the 2014 Commonwealth Games.

Check out more wonderful images of this amazing chapter in the Queen’s Baton’s trip around this tropical sporting paradise here.