Glasgow 2014 ambassador and Olympic and Commonwealth medallist Tom Daley brought the Queen’s Baton back to the Home Nations in a packed welcoming ceremony in the picturesque Jersey harbour of St Aubin, the first stop on the British Isles for the Relay.

Before revealing the baton to the awaiting fans, over 100 local young athletes, many of whom hope to represent Team Jersey at the 2018 Gold Coast Commonwealth Games and beyond, were given the opportunity to attend an informal Q&A session with the Glasgow 2014 ambassador and Olympic and Commonwealth medallist.

Cheered on by hundreds of local well-wishers, they carried the Queen’s Baton into the historic harbour where young athletes – including 12-year old club swimmers Robbie Jones and Fran Stubbings – welcomed them in a public ceremony, officially kicking off the home leg of the Queen’s Baton Relay. 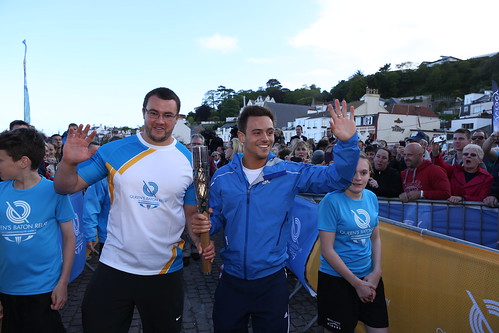 The baton will now continue the final days of its epic journey with an extensive tour of the rest of the Home Nations, finishing at opening ceremony in Glasgow on 23 July.

View all the photos from Day 215 in Jersey.